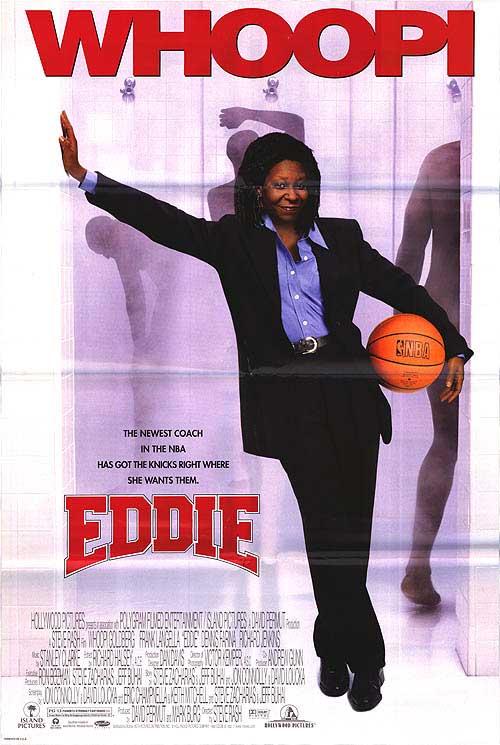 Our definitive list marches on with “Eddie,” which earned a rousing 15% on Rotten Tomatoes annnnnd it’s hard to argue against that. But I’d be remiss to exclude this movie if I’m going to include a certain other movie later in the rankings (the suspense!).

It’s your classic “team X is terrible, protagonist gets a shot to take over the team, team turns things around, circumstances try to screw over protagonist but they prevail in the end”. Say what you want about Whoopi Goldberg taking over the New York Knicks but it’s FAR more believable than the story line that Frank Langella is going to attempt to move the team to………St. Louis. Stephen A. Smith would chain himself to Kwame Brown, Slava Medvedenko and Kwame Brown outside the Garden before fake Nixon could ever even think up such a scheme.

My personal nostalgia in this movie rests with Eddie’s first game as a coach coming against the Cavs. A barely able to walk Brad Daugherty manages to torch Eddie to victory. I remember seeing this and being like “Hell yeah we can beat the Bulls!” Meanwhile in real life they couldn’t even beat the Pacers.

“Eddie” features some great 90’s actors like Richard Jenkins as the assistant coach, Dennis Farina as the coach Eddie replaces and the aforementioned Langella as the team owner. Langella would even go on to date Whoopi after shooting the movie. It didn’t last, but it was worth a shot.

But the best appearances rest in the list of players they chose to make cameos. Just take a look at this list:

What a Murderers Row of random players! You figure for a NBA major motion picture we’re getting Jordan, Malone, Olajuwon, Ewing. Hell no we’re getting Corie Blount and Vinny Del Negro. So great.

HOWEVAH, maybe it’s just me but my biggest beef with Eddie is the professional players they chose to be on the Knicks. Mark Jackson, John Salley and Rick Fox would probably be in my top 25 annoying sports figures power rankings (coming soon?) and they somehow joined forces for this feature. Poor Whoopi, I was rooting against her the whole movie on account of this. So yes, nevermind the owner of the Knicks riding a horse on the court, focus on Rick Fox’s mug, and just how punchable it can be, as Doug Christie once proved.

Sidenote: That fight happened post Ron Artest melee but man, if that happened today how many hours would the sports hot take machine get out of it? They’d get a full day’s worth just out of Shaq’s suit.

Hey someone had to keep this ship steady through all this coaching turmoil. Nothing like the sure hand of Richard Jenkins, as I can’t think of many other actors that are more perfectly suited for the meek assistant coach role. Credit to Jenkins for looking pretty much the same for 20 years, and for growing up into a very successful dinosaur. 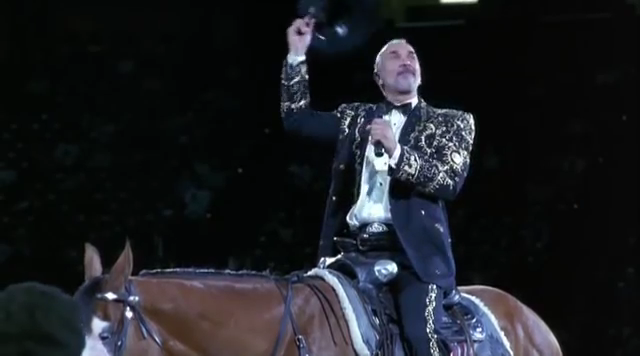 Kind of a victim of circumstance more than anything. They portray him as likable for most of the movie and then it all takes that left turn on the plans to move to…..St. Louis. Still can’t get over that one. Tune in for Eddie 2 when they threaten to move the Yankees to Jacksonville. Besides, I can’t imagine a world where the Knicks are undermined by their, oh.

Sometimes the simpler the running gag, the better. And it gave us a good Vlade Divac exchange, which is always worth it. RIP Dwayne Schintzius. 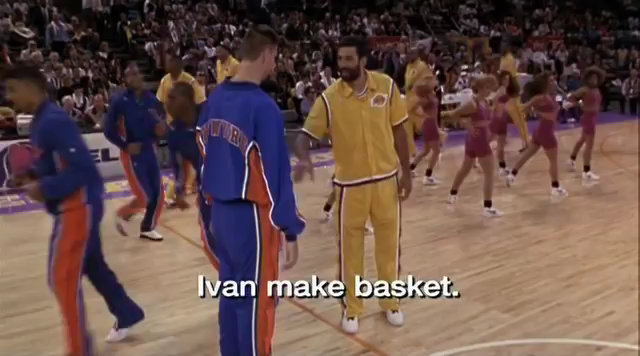 We close out with our highlight of the movie, our wonderful random lot of NBA characters, as we hand it over to one Olden Polynice to set the record straight.

Credit to Greg Osterag for the closeout, who based on appearance was anywhere between 15 and 45 years old at time of filming.